Other information including printable posters that explain this test can be found at the National Occupational Research Agenda Cross-Sector page on Traumatic Injuries.

Certain shoes have been designed for workers who operate in slippery outdoor environments such as restaurants or hospitals. These shoes, which are commonly classified as "slip-resistant", often have this phrase printed on the sole (under-side) of the shoe. Slip-resistant shoes are effective at reducing slips because they generate high friction (sometimes called "traction" or "grip") against slippery floors. However, these shoes lose their effectiveness as the sole surface/tread become worn. Therefore, monitoring and replacing shoes is important for preventing slips. 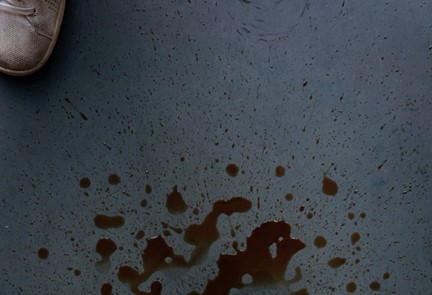 This page describes a simple test for monitoring the worn condition of slip-resistant shoes. The test uses a standard AA battery to determine if shoes should be replaced.

C. When is this test applicable?

The test is only for:

This test is NOT for:

Note that many factors influence slip and fall risk including, but not limited to, the flooring, housekeeping policies, fluids that are present, and the design of the shoe. Furthermore, other forms of shoe wear like the sole detaching from the shoe can be hazardous even if the tread passes the battery test. This test refers only to shoe replacements due to tread wear; it does not provide information regarding whether the shoe has good performance in its new condition, whether the shoe should be replaced due to other forms of wear or tear, or whether the workplace is safe from slip risks. Information about the performance of new slip-resistant shoes can be found in our other publications (see below). Alternatively, we recommend testing shoes against flooring and contaminants that are relevant to a particular worksite.

D. What evidence supports this test?

We conducted three studies (see Section E for more details on these studies) where the battery test was applied to shoes at various levels of wear. In all three tests, shoes that passed the battery test led to higher friction or less slipping than shoes that failed the test. Across these tests, we considered three different measures: coefficient of friction (a measure of traction or how well the shoe grips floor surfaces), fluid pressure (a measure of whether the tread drained the fluid from beneath the shoe), and slipping (to determine if people experienced slip events). The coefficient of friction results revealed that shoes failing the test generally performed about 30% worse than shoes passing the test. Our fluid pressure tests found that shoes failing the test generally had higher fluid pressures than shoes that passed the test. Our slipping experiments found that slipping was more common and more severe in cases where shoes failed the test. These three studies and three measures tell a consistent story that shoes failing the battery test are more dangerous than shoes passing the test. The studies describing these results have been peer-reviewed and published (see below).

E. What methods were used in this test?

Three experiments were performed. These studies are briefly described below. More detailed information can be found in our publications mentioned beneath each study.

In this study, five slip-resistant shoes were exposed to simulated wear while the shoe's friction performance was tracked. The wear was performed under controlled conditions and using shoe orientations that simulated the changing shoe angle during walking. Coefficient of friction and fluid pressure were measured for the new shoes and after each time that the shoe was worn. The performance (coefficient of friction and fluid pressure) of shoes when passing the battery test was compared with their performance after failing the test.

In this study, 11 individuals were provided with shoes and wore these shoes in their natural work environment. Workers returned the shoes to our research lab after each month so that we could test the shoes. Coefficient of friction and fluid pressure were measured for the new shoes and after each month that the shoe was worn. The performance (coefficient of friction and fluid pressure) of shoes when passing the battery test was compared with their performance after failing the test.

In this study, 32 individuals brought their work shoes to the lab. These individual completed a testing session where they unexpectedly encountered a slippery floor surface while wearing their shoes. The slippery surface also contained sensors that allowed us to measure the fluid pressure (i.e., drainage) beneath the shoes. Sensors on the shoes allowed us to determine whether they experienced a slip and quantify the severity of the slip. The performance (whether they experienced a slip, slip severity, and fluid pressure) was compared between shoes that passed the test and shoes that failed the test.